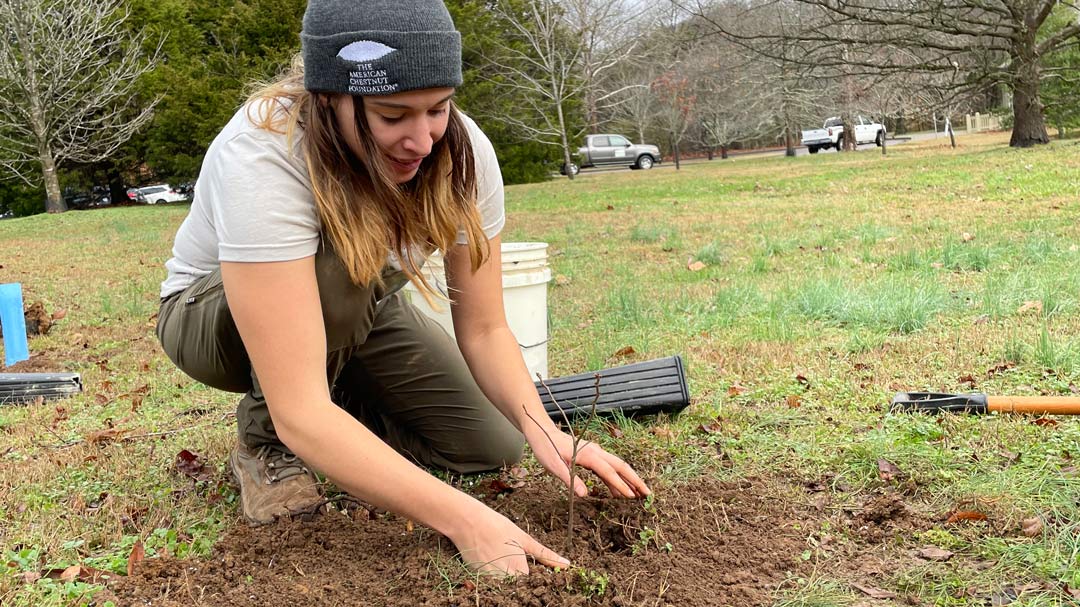 The “King of the Forest”

Dominating the forests of the eastern United States, the American Chestnut once formed its own layer of the canopy, nicknamed the “King of the Forest”. Towering above other native hardwoods, the mature American Chestnuts often reached heights of more than 100 feet.

At the turn of the 20th century, a fungus (Cryphonectria parasitica) was accidentally imported from Asia to New York, via the blight-resistant Chinese chestnut. Records show that the blight moved at a rate of up to 50 miles a year, decimating nearly 200 million acres of chestnuts.

“ TACF’s  backcross breeding program begins by crossing an American chestnut and a Chinese chestnut. This is followed by three successive generations of crossing back to American chestnut trees to restore American characteristics. In between each breeding step, the trees are inoculated with blight fungus (Cryphonectria parasitica) and only those trees showing strong blight resistance and American characteristics are chosen to breed additional generations. For the final two generations, trees with proven blight resistance are intercrossed with each other to eliminate genes for susceptibility to blight introduced from the American parents. “ – The American Chestnut Foundation

Getting the Soil Right

Before we could start planting backcross American Chestnuts in the Parks, we first needed to ensure that our soil could provide the optimal environment for these new plantings. We sent a sample from Edwin Warner Park to soil scientists at Clemson University to test for phytophthora root rot: a destructive fungus commonly found in the southeast that attacks the roots of American Chestnuts, especially in new plantings. Luckily, our soil tested negative for the root rot. With a green light from soil scientists, we immediately scheduled a planting session with TACF.

Jamie Van Clief, the Southern Regional Science Coordinator from the American Chestnut Foundation arrived at the Warner Parks on December 6th to plant the five backcross American Chestnuts. December is the ideal planting time for this process, allowing the backcross trees to root and establish before the extreme heat of summertime.

Per the recommendation of the Clemson soil scientists, we added a clay breaker to the soil around the new plantings to enhance soil drainage and increase the acidity of our soil, an environment in which American Chestnuts thrive.

Each tree is guarded by a blue tree tube to ward off animal browsing, protect the roots from harmful UV rays, and provide optimal growing conditions for these first few stages of development.

The next steps for the project? Provide tender love, care, and attention to these plantings in hopes that they flourish in the Warner Parks. After a year of monitoring by Daniel Charlton, our Tree Trust Coordinator, we will reconnect with TACF and assess whether the Warner Parks provide ideal conditions for the regeneration of the American Chestnut.

Cross your fingers and stay tuned!