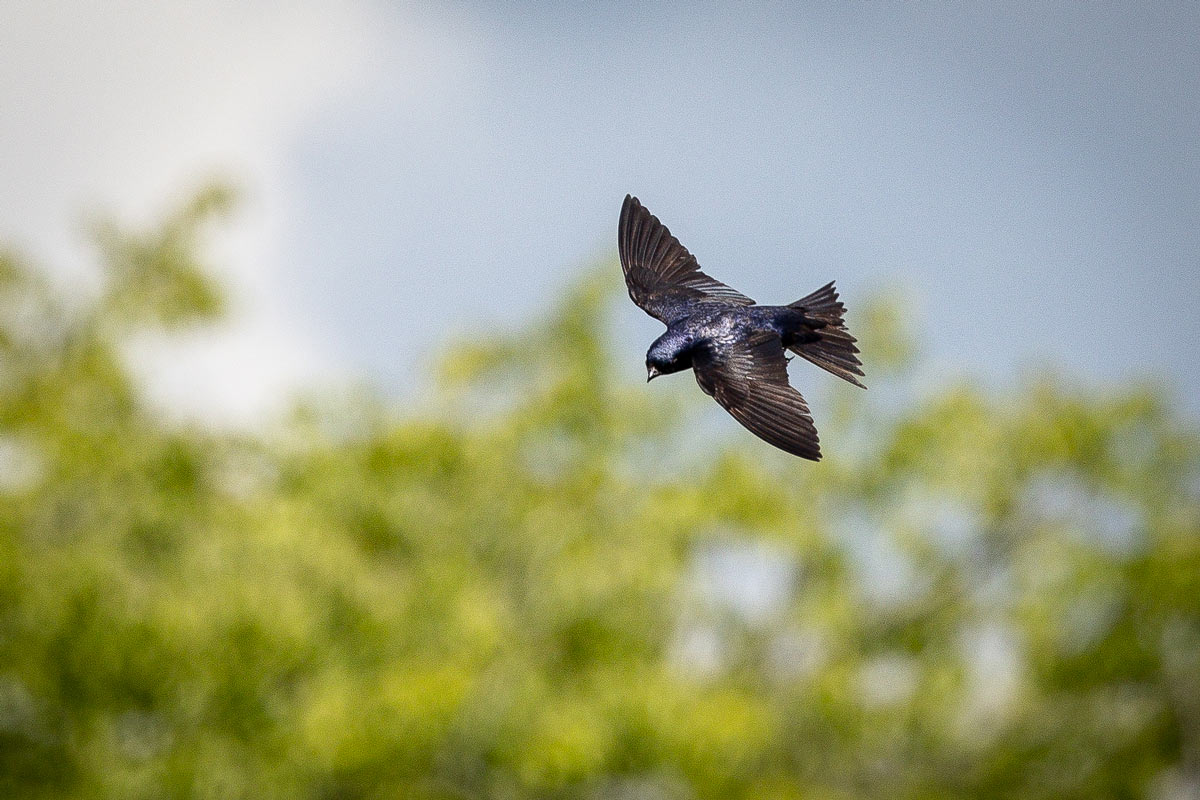 Purple Martin Research Project began in 2000 with the goal to assess arrival & departure dates, reproductive success, and population trends at Warner Parks. Each year from March-August, we document Purple Martin gourd nest use at Warner Park Nature Center. In 2021, we began radio-tagging martin nestlings, a new component of our research, to better understand post-fledgling behavior.

Purple Martins are adaptable birds with strong associations with humans. Unfortunately, and typical of aerial insectivorous birds, martin populations have declined significantly. We hope that our research and public education and engagement help to inform a better understanding and compassion for these birds. It was promising to have multiple interest groups come together in Spring 2022 to find a solution to the removal of the Nashville Schermerhorn Symphony Center martin roost trees with the goal to ensure the safety and to minimize disruption of the Purple Martins. We have an opportunity with the Urban Bird Treaty Program to ensure Nashville provides habitat and reduces hazards to birds such as martins while ensuring communities and businesses can thrive. Please join us in these efforts.

Phenology: Each spring we document the first arrival of Purple Martins to Warner Parks as they return from their wintering grounds in South America, departing again in early fall for their 3000+ mile journey. This year our first observed martin at the nature center was on 21 March 2022, and the last detected by our Motus receiver stations was on 30 August 2022.

Nest Success at Warner Park Nature Center: Martins began to build their nests of grasses, weeds, sticks and mud beginning in mid-May. At the nature center, martins typically cover a completed nest with cherry leaves before eggs are laid. Nests were checked weekly to document nesting activity, number of eggs, or nestlings. At the end of the season, all nest check data were submitted to the Purple Martin Conservation Association.

This year’s results for the nature center:

This year we expanded upon 2021 when we radio-tagged 6 Purple Martin nestlings at the nature center to see if they joined the large downtown migration roost at the Nashville Symphony (they did!). This year, thanks to donations from the Symphony and the Nashville Zoo, we purchased more Cellular Tracking Technology LifeTag radio-transmitters. With a special federal permit, we radio-tagged a maximum of 3 martin nestlings from each nest when young were 20 days of age at 3 locations in Nashville: Warner Park Nature Center, Ellington Agricultural Center, and Bells Bend Outdoor Center.

You may recall stories such as the one in the NY Times about the large Purple Martin night migration roost at the Schermerhorn Symphony plaza in downtown Nashville. While martins have historically roosted at various locations near the Cumberland River, the roost in Nashville during 2020 and 2021 was estimated to be the largest in the area, at 150,000 birds. By radio-tagging martin nestlings, we have learned many of these nestlings born in the surrounding area join this big migration roost.

Symphony migration roost 2022: To avoid lasting and damaging effects on the building and institution, the Symphony decided in spring 2022 to cut down the roost trees in an attempt to redirect the Purple Martins elsewhere. Concern for the martins, urban trees, and downtown businesses lead to several meetings with the local conservation community, Nashville Mayor’s Office, and businesses from the Nashville Downtown Partnership to provide guidance to the Symphony and the City to manage the roost predicament. The agreement included the following:

Timing of martin roost in Nashville: Martin roosting behavior was first observed in the Nashville area on 10 June 2022 by Graham Gerdeman in Germantown and then on 13 June 2022 near the Symphony by observer Thomas Copeland. After those initial sightings, martin numbers increased each night to the hundreds and then thousands, with peak numbers (over 100,000) in mid-August. Our radio-tagged martins were last detected at the Nashville roost on 30 August 2022. Martins were observed in significantly smaller numbers as late as 24 September 2022 by Cory Holliday. One Purple Martin radio-tagged in Pennsylvania in May 2022 was detected by the Warner Park Nature Center receiver station on 11 October 2022.

Where did the martins roost in 2022? As expected with the Symphony roost trees cut down or heavily pruned, the roost was initially very disorganized. While martins did circle above the Symphony area, none landed in the nearby Symphony Place trees. Instead, the martins formed an initial roost that was located on 15 June 2022 by Denise Weyer and Kim Bailey at a small group of trees at a spur of the Cumberland River Greenway at 914 2nd Avenue. The martins used this roost area until the beginning of July when they shifted to a new roost location, perhaps because of the limited available trees at the 2nd Avenue location. By 16 July, observer Finn Goodwin-Bain noticed the martins roosting in a group of cherry trees just below the John Seigenthaler Pedestrian Bridge at the Grayline bus stop on 1st Ave S. The martins continued to use this roost from mid-July through September.

From monitoring the nests to radio-tagging martins to roost observations and non-lethal roost displacement, this was a significant team effort. Many thanks to the following: