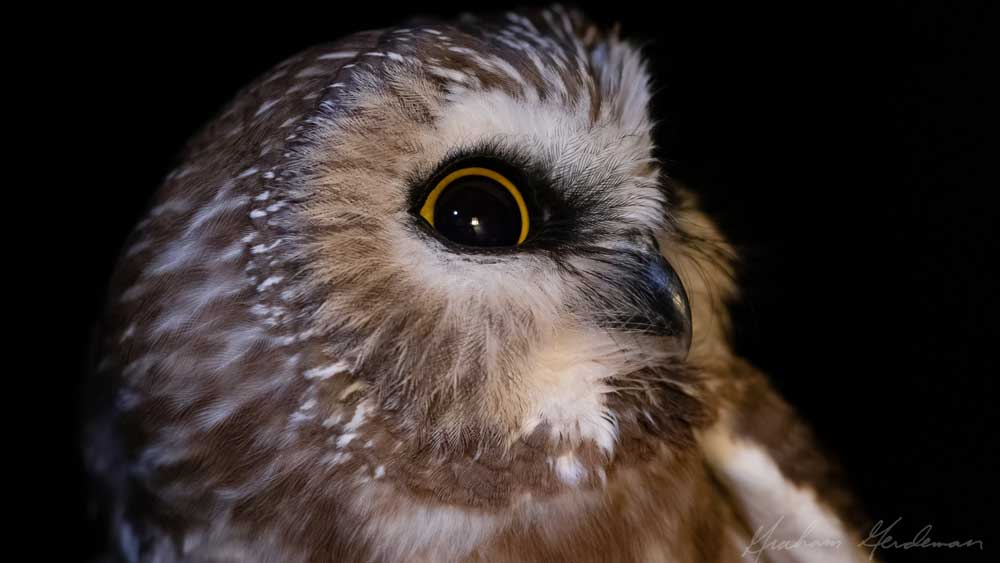 On 03 November 2021, federally licensed BIRD Program banders Kathy Shaw and Sandy Bivens captured and banded a young, male Northern Saw-whet Owl in Warner Parks as part of a long-term research project on saw-whet migration. They caught the owl at 10:15pm, and immediately took it out of the nets to band and measure the bird in order to determine the gender. This particular owl was small and its feathers were consistently worn down, suggesting that it was a male, hatch-year owl.  Photos of the Northern Saw-whet Owl were taken earlier this week by Graham Gerdeman.

“One of the most common owls in forests across northern North America (and across the U.S. in winter), saw-whets are highly nocturnal and seldom seen.” – The Cornell Lab of Ornithology

After capturing the first saw-whet in 2007, Kathy spent countless nights out in the cold trying to catch another one, in several different locations, only to come up empty handed year after year. In fact, Only three Saw-whet owls have been captured in our Warner Parks, all of which were captured during the first week of November in 2007, 2020, and now 2021! Our researchers are wondering if this is an indication that optimal migration through middle Tennessee occurs in early November. We look forward to reporting our final results when the migration season concludes in December.

You can read more about Northern Saw-whet Owls and consider supporting our legacy bird research and Warner Parks conservation efforts by sending a donation, becoming a member, and volunteering with Warner Parks. #ProtectTheBirds #ProtectWarnerParks