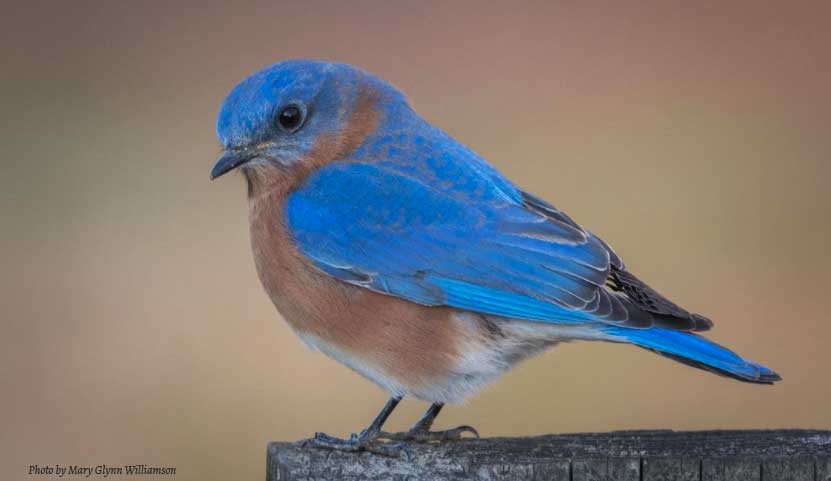 Eastern Bluebirds are found east of the Rockies and are very common here in Tennessee. Their preferred habitat is open, grass-cut areas with scattered trees or posts, surrounded by woods… does that habitat sound familiar? The Warner Park BIRD team operates approximately 50 bluebird boxes throughout the Warner Parks, with 3 within the ideal habitat that is Ridge Field in Edwin Warner Park. Go check them out! There is a team of about 5-6 staff members and volunteers who go out weekly to check bluebird boxes and monitor birds throughout the banding season, early March to September.

Eastern Bluebirds (Sialia sialis) are among the thrush group of birds. Beautiful and petite, the males have a wonderful blue head and back, with a rusty red breast and white underbelly. Females have similar coloring, although not as bright.

Although you might see a speckled breast on the fledglings, or young birds, the speckled breast goes away with adult plumage, which is common among thrushes. There are other birds that have blue color, however the Western Bluebirds and mountain bluebirds, the latter of which are completely blue in color, do not occur in the Warner Parks.

Eastern Bluebirds are cavity nesters, often building their nests in abandoned tree holes created by woodpeckers or cavities in old fence posts. It is uncommon to find old fence posts throughout the Parks these days, which has been a significant loss of habitat for our blue friends. In the Warner Parks, Eastern Bluebirds nest from April to July/August, and can have as many as three clutches/nests in a season, depending on food sources, etc. For example, when Nashville experiences the periodical emergence of cicadas, Eastern Bluebirds thrive with the excess of food, and it is more likely that they will have at least three broods during this time.

You can read in A History of Nashville’s Warner Parks about Amelia Laskey, the prominent Nashville ornithologist who started the bluebird nesting box program in our Warner Parks in 1936. It is thought to be the oldest bluebird box study in the state, possibly the country, and we are proud to say that it is continued through this day through the Warner Park BIRD program.

Decades ago, Eastern Bluebirds were in extreme decline, losing as much as 90% of the population due to loss of habitat and competition with other cavity nesters. Amelia Laskey’s project to put out bird boxes throughout the Park was an attempt to help bluebird populations and combat competition with the nonnative competitors, the English house sparrow and starlings.

The hole built into the bluebird boxes is the perfect size for bluebirds and slightly too small for starlings, keeping starlings from being able to nest within the boxes. Although the nonnative house sparrow can fit into the hole, researchers here are hoping other desirable birds will use the bluebird boxes, such as chickadees, titmice, white-breasted nuthatches, or sometimes even flying squirrels.

A nestling banded at the golf course in Percy Warner Park was recaptured 6 years later in Black Earth, Wisconsin, over 600 miles from the Parks! Bluebirds are not neotropical migrants, meaning we do not expect these birds to travel very far throughout the year. Thus, it was very impressive to see the bird show up so far away! You can read more about the traveling bluebird in the September 2020 publication of The Migrant.

Thank you for joining us this week for Bob’s Nature Note! Education is a fundamental part of our mission to preserve, steward, and protect our beloved Warner Parks.

For nearly 45 years, Bob Parrish has loved Warner Parks. He began his career in 1977 as the second Warner Park Nature Center Director and has since been fundamental in protecting our Warner Parks through the Youth Conservation Corps, Friends of Warner Parks, and Metro Parks. Bob now works for FOWP in resource management and as a historian. He is affectionately known as the Living Library, gracing us with a “Nature Note” every week at our staff meeting, which are proud to share here with you!

In Bob’s likeness, show your love for Warner Parks in whatever way you’re able. Make a donation, become a member, volunteer; pick up trash when you see it, plant a native tree, say ‘hello’ to a spring wildflower – or better yet, a bird flying by. Step in stride with the path he laid long ago, and help us #ProtectWarnerParks.