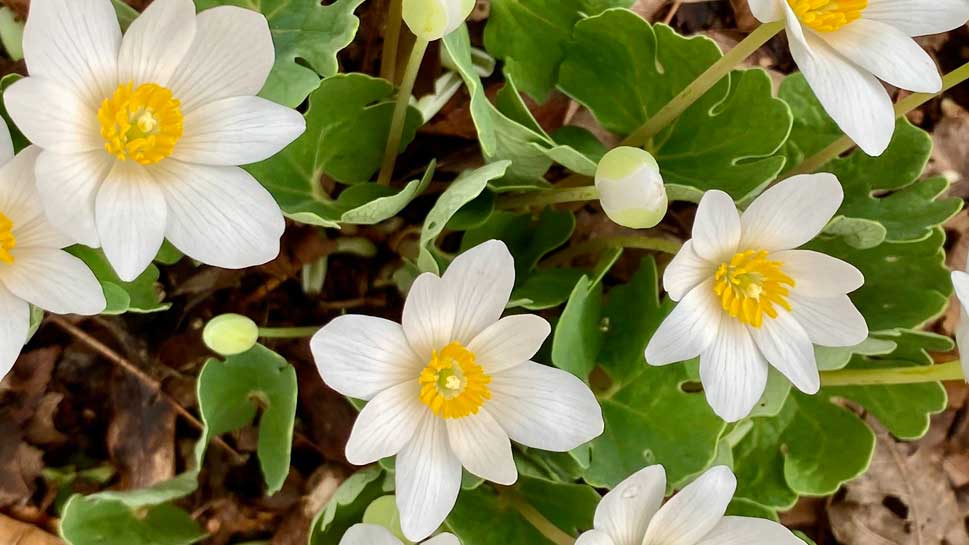 Nothing quite compares to springtime in the Warner Parks, with natural spring wildflowers in bloom across the coves, ridges, and open grass areas in the park. Spring wildflowers occur in a progression, typically beginning in February with the earliest species: harbinger of spring, toothwort, bittercress, bluets, and red dead-nettle to name a few. Some of us have even started spotting trillium along the White Trail!

Although there are over 400 species of wildflowers that can be found in the Warner Parks, one of the earliest, and showiest, is the Bloodroot.

How to ID Bloodroots

By definition, a bloodroot is a flowering, herbaceous perennial in the poppy family. They bloom in March, or later, with 8-12 white petals and a beautiful, bright yellow stamen, or the pollen-producing part of the flower (also the male reproductive organ).

You will often see them fairly low to the ground, with one large basil leaf that can be up to 6 inches across, with anywhere between 5 and 9 lobes that divide up the leaf.

The “Blood” is Hidden Among the Roots

On the surface, we see a white and yellow flower, but underground, the plant has an orange, reddish rhizome, or an elongated subterranean plant stem that produces shoots and roots. Native Americans knew that if you gathered bloodroots and cut them along the stem, they produced a reddish juice that they used as a dye for baskets, clothing, and even warpaint. Thus, the scientific name Sanguinaria canadensis, comes from the Latin word sanguinarius, meaning bloody, and refers to the orange and reddish color of the rhizome on the bloodroot.

Bloodroots prefer shaded areas throughout the Parks, although shade is hard to come by with the lack of foliage in the early spring. They thrive in moist soils that are rich in nutrients and love pristine, natural areas rather than disturbed areas.

They are native to eastern North America, from Florida to Nova Scotia, and west until the Rock Mountains.

A Unique Partnership with Ants

Bloodroot seeds have a nutritious, fat-rich organ covering called an elaiosome, which is especially attractive to ants. Ants are known to come to the seed pods, collect the seeds, and take them back to the nest. After the ants feed on these coverings, they place the seed in the debris pile of their nest where concentrations of the seed can germinate. This is one of the ways that bloodroots thrive, as the ants protect the nest area, allowing the seeds to get around and propagate! It’s a beautiful example of a naturally symbiotic relationship, found right here in the Warner Parks.

Thank you for joining us this week for Bob’s Nature Note! Education is a fundamental part of our mission to preserve, steward, and protect our beloved Warner Parks.

For nearly 45 years, Bob Parrish has loved Warner Parks. He began his career in 1977 as the second Warner Park Nature Center Director and has since been fundamental in protecting our Warner Parks through the Youth Conservation Corps, Friends of Warner Parks, and Metro Parks. Bob now works for FOWP in resource management and as a historian. He is affectionately known as the Living Library, gracing us with a “Nature Note” every week at our staff meeting, which are proud to share here with you!

Every fall, the Ruby-throated hummingbird populati