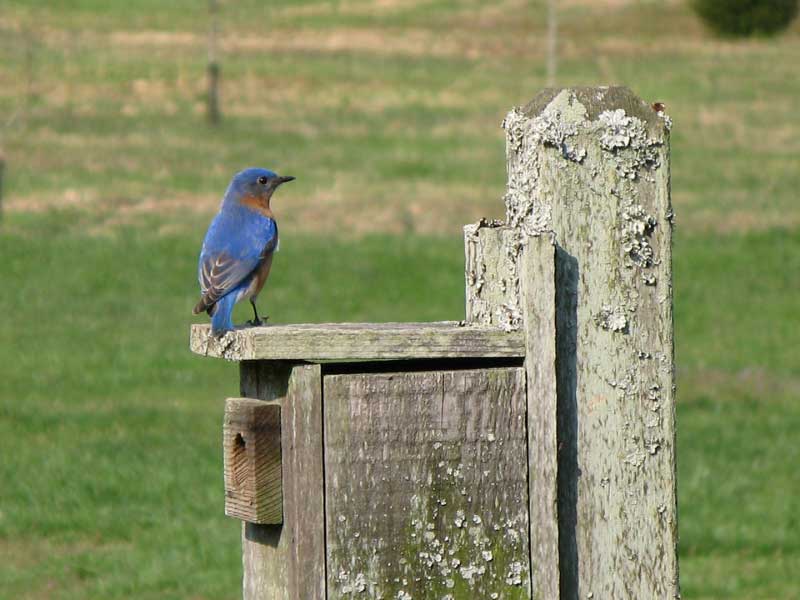 Did you know that Warner Parks has one of the oldest Eastern Bluebird nest box monitoring programs in the country?  It started in 1936 when ornithologist Amelia Laskey, with the help of the Works Project Administration and local Boy Scouts, installed a bluebird trail of nest boxes throughout the Parks. After decades of decline, Warner’s bluebirds are on the rebound thanks to the Amelia Laskey Bluebird Nesting Box Trail program. Today, I (Diana McLusky) help lead an all-volunteer ‘Team Bluebird’ where we continue to monitor bluebird populations and care for this bluebird trail in Warner Parks.

JANUARY:  We started off the year with a Team Bluebird meeting to determine who would monitor each of the 42 nest boxes found throughout the Parks. Despite the bitter cold, part-time naturalist Will Chamberlain restored and renovated several nest boxes from the barn and six new nest boxes were donated by friend and conservationist Mark Fraley.

FEBRUARY: Laura Cook and I participated in the Mark Fraley Podcast to talk bluebirds. By the end of February, the team had visited each nest box and cleaned out or replaced the boxes with new ones.

Natural History Note: In February, Eastern Bluebirds are out searching for nesting sites, singing, establishing territories, and pairing off.

MARCH: The team could not wait to make the first weekly monitoring rounds. This year, the first egg was laid on March 21st. (one week earlier than 2019). Unfortunately, at the end of March, the project came to a screeching halt with the onset of COVID-19.

Natural History Note: Nesting season begins. You may see courtship, nest-building, or parents carrying food to and waste from nests.

May 27th: The team was able to resume their work, though it was clear the bluebirds continued without us. Many of the pairs had already fledged their first set of nestlings, called a clutch, so it was difficult to make a true record of what had happened during those unmonitored 6 weeks.

Natural History Note: Nesting cycles are repeated; second and even third clutches are possible. Males care for the young of previous clutches while the females lay and care for the next. Eastern Bluebirds in our area can have 3-4 clutches in a year.

JUNE, JULY, AUGUST: The team was very busy with weekly monitoring and banding nestlings and adults.

Fun fact: Did you know that bluebirds aren’t the only ones to use nest boxes? We monitor and band Tree Swallows, Carolina Wren, Carolina Chickadee, Tufted Titmouse – and sometimes we even find flying squirrel or mice nesting in the boxes.

Outstanding Outcomes in Light of it All

SEPTEMBER: Final monitoring rounds were made, the boxes cleaned out and checked for any late nestlings. Despite our pause in monitoring, we had a total of 220 eggs recorded for the season. Of those, 145 hatched and 114 grew to fly from the nest (called fledging). We were able to band 79 young and 2 adult bluebirds. We also captured 13 previously-banned adults.

Natural History Note: The nesting season completes. Family groups are frequently seen, and both parents and young birds help to feed the final clutches of the season.

We submitted our data to the Tennessee Bluebird Society, and the statewide research was presented during the annual conference in November which was held virtually this year. Laura, Sandy and I attended.

Natural History Note: Eastern Bluebirds in our area are considered year-round residents. Winter is a crucial survival period, with local flocks living off native fruits and berries and roosting in boxes or natural cavities.

How you can help at home