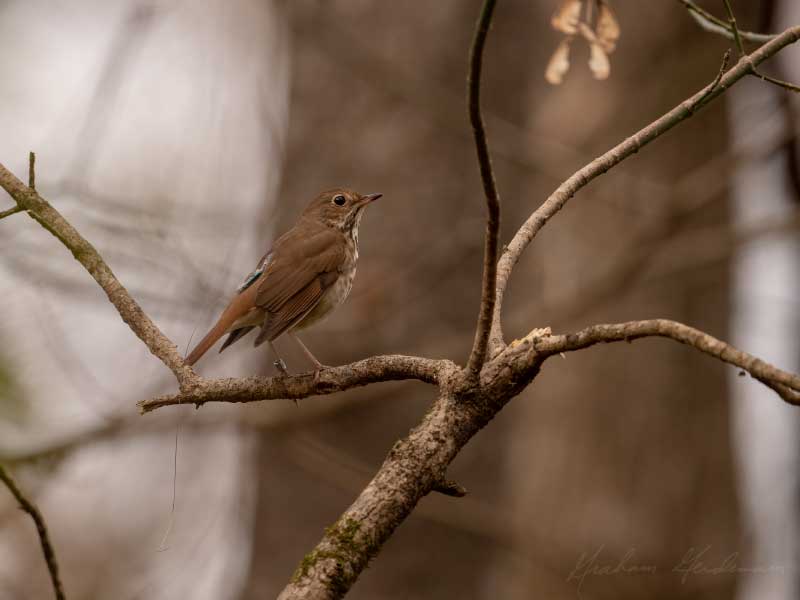 Each fall we look forward to the arrival of our avian winter-guests – birds like Hermit Thrushes, White-throated Sparrows, Yellow-rumped Warblers, and Ruby-crowned Kinglets­. These are all birds that breed further north or at higher elevations but instead of flying to Central or South America, they spend the winter with us here in Middle Tennessee.

In their breeding areas, Hermit Thrushes, Catharus guttatus, can be identified by their habit of quickly raising and then slowly lowering their tail, as well as their thin white eyeing and contrasting rusty brown tail. They are known for their beautiful song and can be found foraging in leaf litter for insects and in trees for fruit during their winter here in middle Tennessee.

The Warner Park Nature Center Bird Banding Station, has captured 37 Hermit Thrushes since 1982. Interestingly, only 3 Hermit Thrushes were captured during the first 20 years of banding from 1982-2001. The other 34 were captured between 2002-2021. This may be because the area around the banding station has evolved to have a more closed tree canopy with thick understory along Vaughn Creek, the ideal habitat for thrushes.

In 2020, the BIRD Program received training and federal approval from the Bird Banding Laboratory to radio-tag five species of thrushes to help us better to understand if Warner Parks, close to an urban center and with intact forests, provides important habitat for birds (we refer to this as our Motus project). Motus research compliments the long-term bird banding station at the Warner Park Nature Center, which has been on-going since 1982! Our hope is that Warner Parks provides a good winter habitat with food, shelter, and water– a place where Hermit Thrushes can thrive.

Based on our banding records, it appears individual Hermit Thrushes return to Warner Parks winter after winter. This tendency is referred to as site fidelity, a behavior documented by researchers in other parts of the Hermit Thrush’s winter range. The evidence is in our research:

Evidence has also shown that Hermit Thrushes gain plenty of fat while they winter in the Warner Parks in preparation for their spring migration, indicating that Warner Parks provides good wintering habitat:

We look forward to reporting on more insights and lessons learned,

The BIRD Program is funded by Friends of Warner Parks, in collaboration with Warner Park Nature Center and Nashville Metro Parks and Recreation. This year marks the 40th year of the WPNC Bird Banding Station thanks to our dedicated volunteers, staff, and partners! Please support our legacy bird research and public engagement programs with a donation, becoming a member, and volunteering with Warner Parks. #ProtectTheBirds #ProtectWarnerParks.

Hermit Thrushes travel hundreds of miles each fall, returning to the same area in search of a safe environment with food and water during the cold winter months. You can help by: