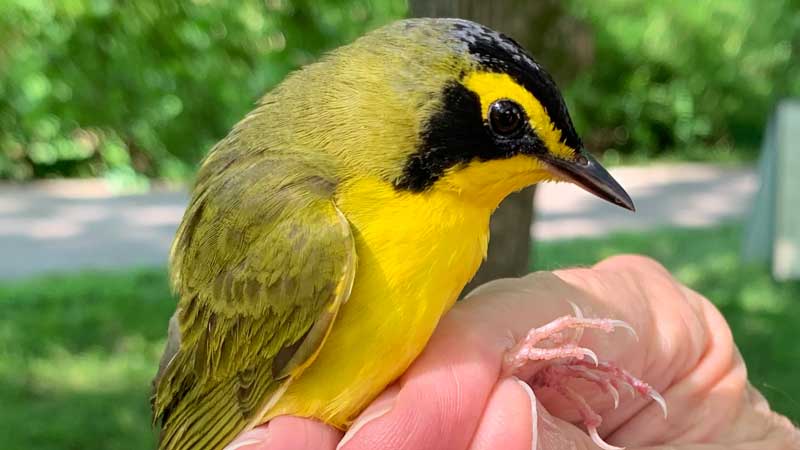 Late June is a great time to observe the Kentucky Warblers in Warner Parks, neotropical migrants that fly from Central America to North America each spring to breed and raise their young. Leave it to the B.I.R.D. crew to have documented evidence of adult pairs returning year after year to nest in the same area. Talk about cross-continental consistency, and the illuminating discoveries of bird banding!

Where to Find Them in Warner Parks

The adults prefer dense understory for breeding, which is an abundant habitat right behind the Nature Center. Because they forage down low, Kentucky Warblers can sometimes be easy to see – and they are definitely easy to hear with their loud, 2-part song.

Only 8-9 days after hatching, the young leave the nest. The fledglings then spend about 3-4 weeks with their parents, staying in contact through chip calls as the adults continue to feed them. You can hear the orienting calls as a young fledgling hops around in the underbrush by watching this brief video.

There’s currently a family of Kentucky Warblers hanging out behind the Nature Center pond and along the lower section of the Hungry Hawk trail! The research team recently captured and banded an adult male and one of the fledglings.

During this time, the young birds are molting like crazy, and you can sometimes see the pin feathers on their head and neck.

And then they grow and it’s time to move on as neotropical migrants do. In just a couple of months, they will be on their way back south with the other migrants. Will they return to breed in the same area they were born? That is just one of many questions about migratory birds we look to answer at the WPNC Bird Banding Station.

The B.I.R.D. Program is funded by Friends of Warner Parks, in collaboration with Warner Park Nature Center and Nashville Metro Parks and Recreation. This year marks the 40th anniversary of the WPNC Bird Banding Station thanks to our dedicated volunteers, staff, and partners!  Please support our legacy avian research and public engagement programs by making a donation, becoming a member, and volunteering with Warner Parks. #ProtectTheBirds #ProtectWarnerParks.