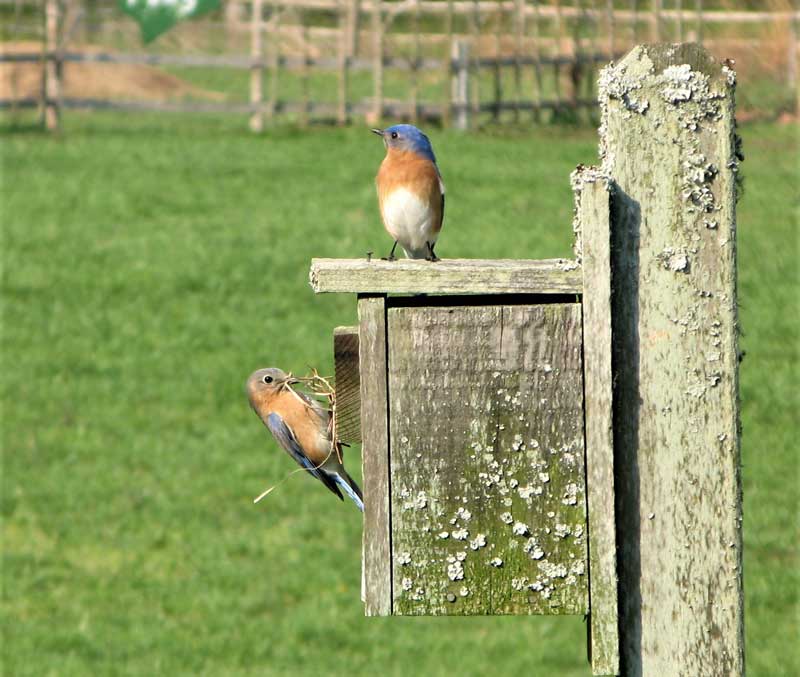 What’s Love Got To Do With It

Love, Joy, Hope, Renewal, Prosperity … these are some of the symbolic words often used to describe our Eastern Bluebirds. Lucky for us, this beautiful bird can be seen year-round in our area and particularly in Warner Parks where we have a long and impressive relationship with these birds.

Eastern Bluebird behavior is often a good first clue to identification. Bluebirds can be seen perched on a branch or fence in open habitat such as yards and fields. There they will wait and then fly down to the ground to capture an insect, spiders, or even a small snake.

While the male Eastern Bluebirds have more vivid colors than females, both genders are blue above with an orange breast. Fledglings, birds that have just left the nest, are more brown with white spotting on the back and chest.

Bluebirds have complex and diverse songs but one of their more common soft and subtle vocalizations is often described as tu-a-wee, churtle-churtle, or cheer-cheerful-charmer.

Did you know that Warner Parks has the oldest, continuous Eastern Bluebird Nest Box project in the U.S.! It was started in 1936 by Amelia Laskey to monitor nesting success of bluebirds. Dedicated volunteers continue this research project today monitoring 50 nest boxes throughout Warner Parks from March through September.

Eastern Bluebirds are considered ‘partial migrants” meaning some individuals and northern populations move south for the winter while others, like ours in Tennessee, are considered year-round residents. Migration is dependent on weather and food availability such as insects and fruit.

In July 2010, volunteer Diana McLusky banded 5 bluebird nestlings in a nest box at Percy Warner Golf Course. Six years later, in June 2016, a bluebird monitor in Black Earth, Wisconsin captured this same bluebird incubating 6 eggs! This is only the 5th known instance of a Tennessee bluebird found in another state. You can read more about this amazing discovery here.

‍Eastern Bluebirds are secondary cavity nesters, meaning they need another animal like a woodpecker to first excavate their breeding cavity. Today, many of us supplement these natural cavities with nest boxes.

How You Can Help!

There are several important steps you can take at home and in your community: 7 tips to helping our birds. Because Eastern Bluebirds eat primarily insects, we recommend planting native plants and not using herbicides and pesticides in your yard and garden. And because bluebirds are secondary cavity nesters, consider placing and maintaining a nest box – just be sure to put the nest box somewhere you can easily maintain the box and observe these fabulous birds. The North American Bluebird Society is a great resource.

The B.I.R.D. Program is funded by Friends of Warner Parks, in collaboration with Warner Park Nature Center and Nashville Metro Parks and Recreation. This year marks the 40th anniversary of the WPNC Bird Banding Station thanks to our dedicated volunteers, staff, and partners!  Please support our legacy avian research and public engagement programs with a donation, becoming a member, and volunteering with Warner Parks. #ProtectTheBirds #ProtectWarnerParks.